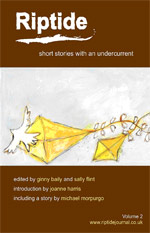 Volume 2 contains an introduction by Joanne Harris, whose novels are published in over 40 countries and have won many awards.

Michael Morpurgo has contributed a story. Michael is the author of over one hundred books, and the winner of many literary prizes. He was awarded an OBE in 2006 for services to literature.

I am a cameraman. I work freelance, working on my own. It’s how I like it. I was on the West Bank a few weeks ago, my first job in the bitter cauldron of confrontation that is the Middle East. Of course I had seen on television, like most of us, the anguish of the grieving, the burnt out buses, the ritual humiliation at checkpoints, the tanks in the streets, the stone throwing crowds, the olive groves and the hill top settlements, children playing in open sewers in the refugee camps  ̶  and now, the wall. I knew the place in images, I was there to make more of them, I suppose. But I had a more personal reason for being there too. I saw it on television, watched in disbelief as the Berlin Wall came tumbling down. It was the most hopeful, most momentous event of my young life. Now another wall had been built, and I wanted to find out about the lives of the people who lived close to it  ̶  on both sides. I began my travels on the Palestinian side.

The Death of the Aardvark – Robin Sidwell 1

A Clean Life in the North – Jean Rafferty 59