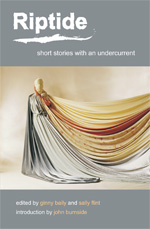 Growing up Greg thought that Sarah hated him. She used to say he stank, that his friends were nerds. ‘Gross’ she’d say when he lay on his bed naked, steaming from his bath, ‘you freak’. Since she’d gone to college, they’d had little to do with one another; nowadays she didn’t come home more than a couple of times a year.

There were no guests this Christmas but Gran, their mother’s mother. They’d just finished lunch. Bill, their Dad, was concentrating hard, squirming in his seat. He cleared his throat, ‘Going to find something softer to sit on,’ he said, excusing himself, wiping his mouth with a holly napkin. ‘Right Mother,’ he said making an effort to raise his voice, using the table to hoist himself to his feet, ‘going to join me?’

Gran was partially deaf with eyes like frosted glass. She farted as she let Bill guide her by the elbow through to the lounge.

Sarah rolled her eyes and slumped onto the placemat of yellow roses. She made a noise into the crook of her arm like a bee trying to get out of the window.

Last year things had been different.

Doctor in the House – Paul Brownsey 43

Waiting in the Darkness – Sally Flint 67