a collection of Devon themed stories 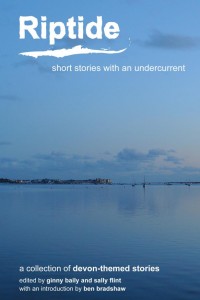 Riptide volume 7, produced in collaboration with Wordquest Devon, contains an eclectic mix of stories and memoir. These Devon-themed stories express the uniqueness of the county, its towns and its countryside, its wild parts and its settlements. Devon is the thread that binds the diverse stories into a whole, but the stories spill over the boundaries of the county to find a universal resonance.

When the sun finally appeared, it pressed itself like a pale thumb print into the mist over the moor. Mist so thick it was almost liquid, like a wide lake with no depth and no detail until, just beyond the garden hedge, it picked out the edges of ferns and gorse-bushes. It’d break soon. Be another swelterer of a day.

Wyatt brushed a few flecks of tobacco from the arm of the bench then lifted his hand to shield the match flame, although there was no wind. He couldn’t see more than thirty feet, but he knew the shape and colour of the hills, the few low trees, and he watched them through the mist. He knew the valley, every sheep-track and mound of rock, just as he knew the house behind him – each loose floorboard and slate, the way the cob held the night’s dampness and dried throughout the day, like breathing; and the way an east wind would press itself in through the windows, to fill the house with a wildness that could last for days.

‘Never get attached to anything that you can’t take with you,’ his father once told him, as they had watched field after field turn to mud, then tarmac. Houses appearing from nothing.

He drew heavily, leant back and watched the first small movements of the day. He always woke early; liked to have some time to himself before he had to leave for work, or before he had to leave to look for work, trudging between the neighbouring farms until he found something. He’d always been able to find something, enough to get by, and if there were days when he’d already made enough, he’d leave in the morning and just walk – up to the rocks, through the valley, past the town – and maybe find a pub that was open early. But, this last week, he hadn’t even done that. Each night he had just lain awake, the darkness close around him, until he could bear it no longer.

To the Punks of Dawlish – David Goodchild 31

The Freaks of Nature – Luke Kennard 97

The Grass Oceans Beyond – Anthony Howcroft 111