A collection of childhood themed stories for adults. 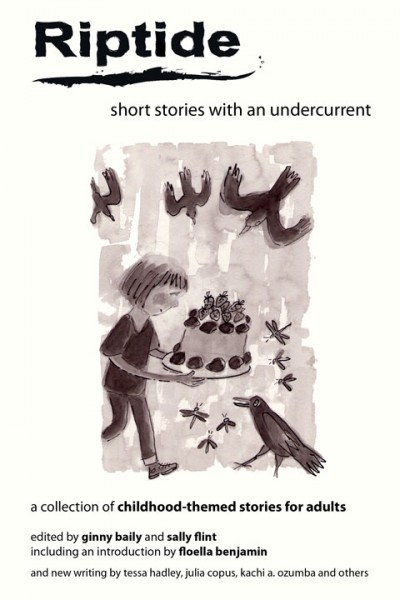 This volume of Riptide was produced in collaboration with extreme imagination Exeter Children’s Literature Festival 2013. The collection of 18 stories aims to challenge the adult reader by using the theme of childhood to promote questions and bring together unexpected characters, themes and places

Violet woke out of a dream of crows. In the dream there had been a smashing and crashing of tree tops, coarse laughter, feathered black bodies hurtling for the sake of it, collision dare-devilishly just averted, and the close brush of the blood-heat of others. She had seemed to be one of the crows, cackling and hurtling, joining in the harsh percussion of their talk, prodding with her own dingy, snouty beak. As she flew – arm-wings at full stretch, rubbery-buoyant on rivers of air – she had glimpsed ground far below, and the light she rushed into, between spread fans of leaves, was brilliant as broken glass.

-Those are rooks, her mother said when Violet woke and told her dream. –Rooks live in colonies in the treetops, crows are solitary.

-What a lovely dream, she added.

But it was Violet’s dream, so they remained as crows.

It was a diminishment to be returned to her own room, where everything – decorated in her mother’s austerely modern taste, but crowded with garish toys and posters, in Violet’s – was quiet, and worn out with familiarity. Her mother was pulling up the blind. The real day, dawning on Violet, boded ill: no morning television, because it was her grandfather’s eightieth birthday and the whole family was gathering for a lunchtime party in his garden. Violet’s mother had made a cake, and Violet as the youngest grandchild (she was nine) was going to carry it to him in a procession – the others would be bearing flowers and presents. Her mother had got this idea from somewhere – probably out of some old book. Violet felt a warning in the plan already, that it had ignominy in it for her.

Our Gang of Three – Julia Copus 59

Cornflakes and Snow – Kachi A. Ozumba 73

The Man in the White Coat – Michael Stewart 91

No Friend of Mine – Christine Steenfeldt 133

George and the Goblin – Ginny Baily 153