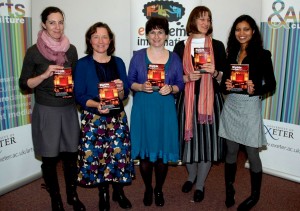 The launch of the special young adult volume of Riptide as part of the Exetreme imagination festival was a well-attended and lively event hosted by Exeter Central Library. Five of the ten short-listed authors attended including the overall winner Sheena Wilkinson, who flew in from Belfast to attend. She said: ‘Thanks SO much for a wonderful evening. I adored every minute of it, especially getting to read my story to such an appreciative audience and being so well looked after.’

Novelist Philip Hensher, the overall judge of the competition, presented the prizes and introduced the winning authors: Nel Boswood, Dominique Jackson, Amy Bartlett and Anita Sivakumaran who all read extracts from their stories. Live music was provided by Harry Haynes and Pete Lowe of the Jive Jacks.

Exetreme imagination, the first-ever Exeter-based festival of literature for children and young people, received funding from the Arts Council.