The thirty long-listed and ten short-listed authors for the Riptide Short Story International Competition are listed on our competition page.

The launch will be on 2nd November at Exeter Central Library at the start of the Exeter Children’s Literature Festival. Philip Hensher will present the £1000 prize to the overall winner. See forthcoming events for details.

Volume 6 will be launched on November 2nd and is now available to order from our shop.

This issue is a special one featuring the ten winning stories from our short story competition for young adult fiction and with an introduction from our competition judge, Philip Hensher. 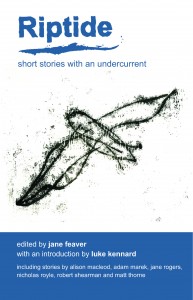 The current issue of Riptide, available now, is Volume 5.

Robert Shearman’s ‘Coming in to Land’ kicks off the collection with a surreal take on faith and flight paths. In ‘Café Bohemia’ Alison MacLeod’s ‘strikingly original voice’ (The Guardian) takes us into an unsettling world of limitless rooms and Adam Marek brings his ‘genuine, unsettling talent’ (The Independent) to the streets of Cambridge, teeming with dead alumni.